This text is placeholder.

What’s Wrong with my PPC Campaigns?

Just about all who have delved into online advertising have experienced this — you take the time and spend the money to craft a pay-per-click (PPC) advertising campaign only to find that your best-selling product, which usually enjoys a high conversion rate, is not selling well at all. Traffic is increasing, but sales are flat, or even declining. Anyone who has experienced this knows how frustrating and perplexing it can be. If this sounds familiar to you, it’s likely that you are a victim of fraudulent clicks. Advertisers often use teams of low-wage workers in the third-world, or malicious bots and software that continue to click on your ads at random intervals, sucking cash from your account. Sadly, click fraud is even prevalent in certain paid advertising portals, where users can go unnoticed when clicking on their own affiliate links to generate cash for themselves.

The problem of click fraud is still widespread, and increasing at a fast pace despite advances in monitoring and anti-spam technology deployed by Google and other large search engines. It’s also nothing new. Back in the early “wild-west” days of search engine marketing, there were several programs on the market that used bots to click on banner ads (remember those?) displayed on multiple domains with the same same owner increasing revenue generated by the ad host on the dime of the advertiser with completely insincere clicks. Law enforcement agencies eventually began to take notice when this practice became so rampant that large teams were hired throughout the developing world on a large corporate scale to click on specific ads at a fixed rate. Another widespread practice was when employees were instructed to click on the banner of their competitors, in order to shrink their marketing budgets. Not only did the competitor find it harder to compete, but the fraudulent company would often get the best spots for advertisement, in return.

The situation improved as click-fraud prevention software became more sophisticated in detecting low-retention rates accompanied by unusually high click volume, as well as multiple clicks from identical or similar IP addresses and the like. As the situation improved somewhat, many companies and stakeholders began to get complacent, or chalk up losses to the “cost of doing business.” Yet the result of this general crackdown was that it forced brazen scammers and spammers to be far more subtle but no less active. In short, the problem has not disappeared. Current research shows that almost 20 percent of the clicks on advertisements are mostly unaccounted for. What’s more this number represents only the click trends that were retroactively found to be suspicious based on a best-guess; it doesn’t include the fraudulent clicks that slipped through. An analogy would be a high crime rate (in this case where one-in-five commercial interactions is fraudulent) and that doesn’t even include crimes committed that go unreported!

From the perspective of large firms such as Google and Yahoo, which both invest large sums of money into creating sustainable PPC platforms, fraudulent clicks are still the most significant problem they need to address. A sensible position, since advertising accounts for over 95% of Google’s revenue. Yet, aside from secretive (and therefore questionably effective) real-time prevention methods used, Google largely addresses the issue after the fact, by crediting accounts of advertisers, who often must demonstrate first that they have indeed been victims to fraud . Advertisers often are forced to submit a report of suspicious activity in order to justify their claim and can only then be credited. Even if credit is easily obtained after the fact, it doesn’t stop the temporary maxing out of ad budgets, which knocks your campaign right off the web and results in lost business.

ClickFraud.com: The Best Solution
There are a number of third-party software solutions. The vast majority of these are designed for very large corporate clients, and are prohibitively expensive for small to medium sized business. Other, more affordable options exist which block identical IP’s and identify basic and established fraudulent click patterns. What’s really exciting is the newest service on the market — FraudBlocker. Designed specifically to help customers track fraudulent clicks using Google API for Adwords campaign, clickfrauds.com is unique. The concept behind the technology evolved when engineers at the company wanted to track their own advertising performance, without depending on elusive and convoluted metrics from Google. The result of their efforts is a highly-sophisticated machine learning algorithm. Without slowing down your campaign in the least, ClickFraud.com blocks suspicious activity in real time. What’s special, though, is that the FraudBlocker system contstantly learns from experience, identifying new trends and patterns of based on dynamic and constant analysis. It reviews a wide range of data (such as geolocation, device time, browser time, click patterns and signatures, and more) in order learn and adapt dynamically. Using a graded designation of potential risk, ClickFraud.com keeps high-risk offending IPs from ever even seeing your ad, while ensuring that no genuine traffic is permanently prevented from seeing and clicking on your ad.

FraudBlocker.com takes the stress out of your ad campaigns, boosts your conversion rates, and protects your marketing budgets. This allows you to get back to what matters, your business! Fraudblocker.com is also extremely cost effective, and definitely worth a try. 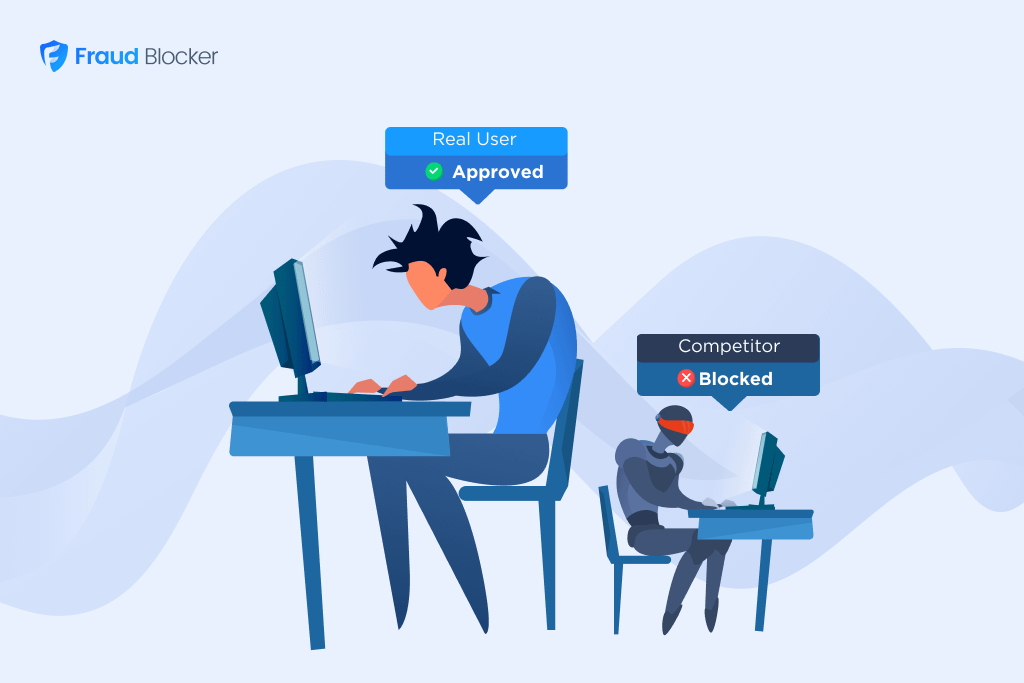 Here’s How To Stop Competitors From Clicking Your Ads

Pay-per-click (PPC) advertising is based on competition. You bid on keywords and phrases that will…
Read Full Article →

What is Bot Traffic?

When most people hear the term “bot traffic,” they think of cybercrime or fake social…
Read Full Article →