What is Ad Stacking?

Cost-per-thousand (CPM) and pay-per-click (PPC) advertising are types of paid digital advertising based on impressions and clicks. The customer will pay a predetermined fee for every click or every 1,000 impressions the ad receives. Unfortunately, ad networks have found an easy way to rip off marketers for clicks and impressions that were never actually served.

What is ad stacking?

Ad stacking is the layering of ads in a single ad placement so that only the top ad is visible. All ads in the stack are billed for each impression or click of the space. Fraudsters place multiple ads into programmatic advertising campaigns and generate revenue for the unviewed ads.

The worst effect of ad fraud is its purpose. According to the UK National Crime Agency, ad fraud is a low-risk, high-profit cybercrime that often funds human trafficking, child exploitation, slavery, drug trafficking, and arms trading.

Corrupt websites are stacking ads on top of one another, making them invisible to human eyes and yet charging the advertiser fully. 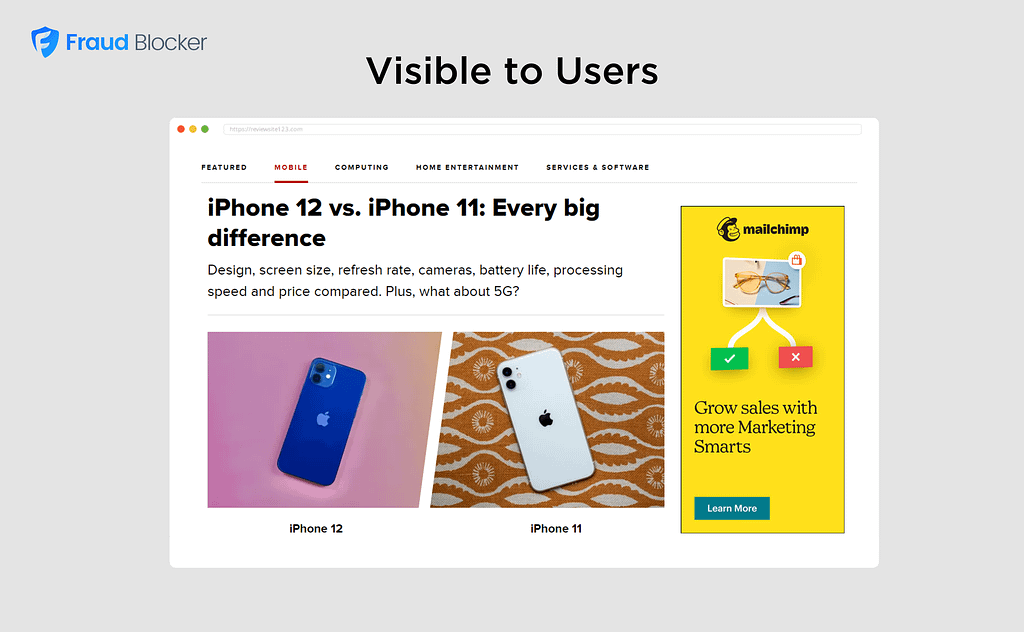 In early June of 2019, a fraudster began testing six domain pairs in campaigns with at least three demand-side platforms that fed into dozens of ad exchanges and supply-side platforms. They then executed the fraud in the mobile apps of ten newspaper publishers who use popular software development kits for their app environments.

When the domain combination executes, it loads a static placeholder image visible to the user. At the same time, a video ad renders in the background and continues to make calls. Ad calls are requests for the ad that result in impressions when the ad is loaded. By mid-June, the incident had surged to more than 10,000 ad tags in just four days.

Another example is shown below. This type of site is known as “Made-For-Advertising (MFA) where the content on the page is inundated with low-cost ad units. The publisher often runs ads on native ad channels and hopes the user clicks enough ads on their site to where they recoup the cost of their initial click.  In many cases, the publisher loads invisible ads or relys on accidental clicks to boost their ad revenues.

How common is ad stacking?

Ad stacking is one of the most common forms of ad fraud, surpassing even credit card fraud. It accounts for 20% ($66 billion) in global ad spend, affecting businesses of all sizes, from local SMBs to international enterprises (AdAge). Accounted losses from ad fraud in 2020 were $35 billion and will likely reach $50 billion by 2025 (Wfanet.org). North America and China saw the highest losses in 2019 with $2.6 billion and $18.7 billion, respectively.

How to prevent ad stacking?

You can sometimes identify ad stacking by the multiple impressions from a single device with the same timestamp. It’s a relatively straightforward process, but it’s tedious and requires dedicated personnel hours to track each ad in each campaign. Recovering your losses after you detect fraud is another endeavor entirely.

The best method of preventing ad stacking losses is to protect your campaigns in real-time with software designed to identify today’s most damaging fraud practices. Fraud Blocker’s proprietary algorithms detect ad stacking, click farms, click bots and other types of fraudulent clicks faster so you can minimize losses and make the most of your marketing budget.

Ad Fraud is a Problem Sellers Don’t Want to Solve

Ad networks are getting rich selling you their traffic, whether it is real or not.
Read Full Article →

The Most Expensive Google Ads Keyword in 2022

See which keywords are the most expensive in 2022 and how to avoid paying for high CPCs.
Read Full Article →

This infographic shows each of the pitfalls that can cost advertisers to significantly waste their money in the ad buying process.
Read Full Article →

LEARN
What is click fraud?
What are click bots?
What is bot traffic?
What is a click farm?
What is ad stacking?
What is a viewbot?
What is invalid traffic?
Click fraud guide
Articles
FAQ